Direct School Admission (DSA) is a program that allows Primary 6 students to apply to schools before taking the PSLE. If students have a talent in computer science for example, DSA can be considered! There are currently 32 schools that cover a variety of areas such as coding, robotics and STEM (science, engineering, technology and mathematics). Here’s a list of schools. 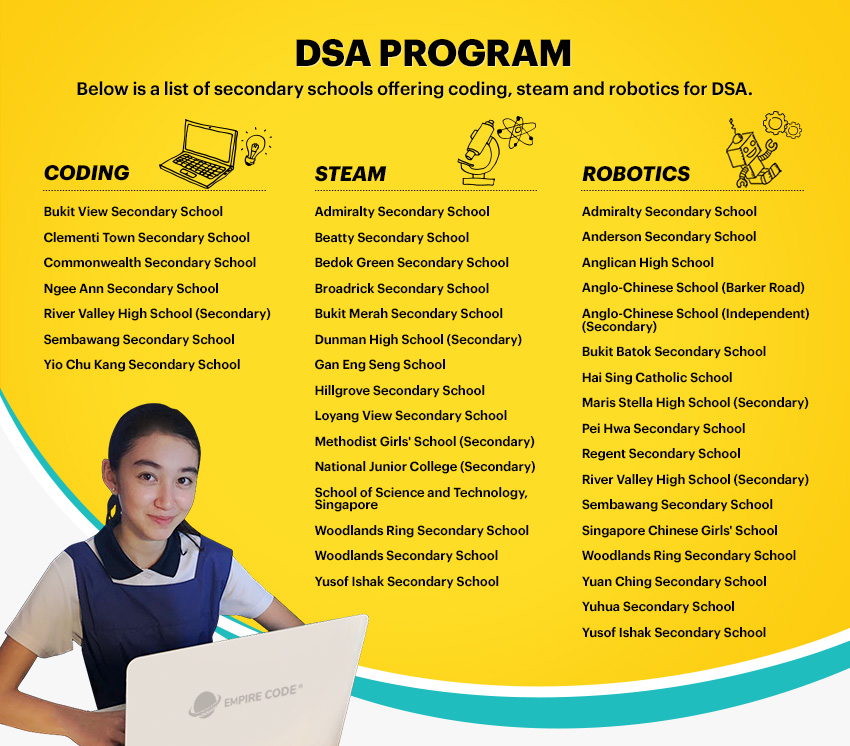 How schools select students for DSA

Depending on schools and DSA categories, the selection process may vary. For example, students will need to submit a portfolio consisting of their achievements, result slips and personal statement. Afterwards, they will have to go through an interview process.

This is the time to explore the choices available. Different schools will have varying selection and interview processes so do make sure to check the schools’ website for more information.

After exploring and shortlisting the desired schools, it is time to apply for DSA. Parents can help their child submit an application via the DSA-Sec portal.

If shortlisted, students will be invited to interviews conducted by the DSA schools. Given the Covid-19 situation, these may be held online.

School allocations will be received along with the PSLE results, having two outcomes – either successful or unsuccessful.

How we can help

With our customised curriculum, we aim to build critical thinking, speech training and presentation skills, helping students to gain confidence. Each student will be assessed based on their age and the categories they want to focus on, namely coding, robotics or STEM. They will learn how to code through interactive projects using programs such as LEGO Robotics, Minecraft: Education Edition, and Python.

Students will get dedicated sessions with us to put together a comprehensive portfolio, as well as learning interview etiquette and preparations to ace their interview. Upon completion of their program, students will receive a certificate and assessment to enhance their portfolio.

So what are you waiting for? For new students, sign up for our DSA assessment today, it’s for children as young as age 7. If your child is an existing student, contact our friendly customer service agents for a free consultation. 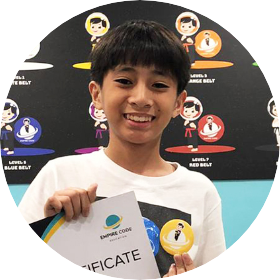 School of Science and Technology

“My son Rey has always liked computer games, he loves Minecraft and Roblox the most as these games allow him to build, design, calculate his game space and challenge his creativity. He would often call me to his computer desk and enthusiastically show me his new creation and design and he marvels on the vastness of possibilities that he can create.

His primary school had this program for the students to learn basic programming like Scratch. Rey instantly developed this interest in programming, so he began to do some simple codes whenever he is free at home and was very ecstatic each time he made his code work. With the influence of his dad, who he himself is a hardware and software engineer, Rey’s passion in coding was fueled and ignited.

In September 2019, I came upon an ad about an activity offered for kids interested in completing an Escape Room by cracking codes. Empire code was running this activity during the school holidays. I signed Rey up for it and after he was done with the activity, he saw the campus in Tanglin Shopping Centre and learned that they were offering programming lessons. Rey couldn’t wait to go back.

Jasmine from Empire Code was very helpful and explained the various levels of learning and hence, Rey started his lessons, beginning with a 20-hour credits.

The lessons really helped open Rey’s world in programming and broadened his horizons about coding world.

Jasmine from Empire Code was very supportive and she even helped to call the school to collect details on how a student would go about applying for DSA.

With this goal for DSA in mind, Rey continued to learn various programming languages like JavaScript, Python and C among others from his caring teachers form Empire Code, Aaron, Eric and Felicia.

Then, the most awaited day came. Rey was offered to join SST for Secondary education. Rey was overjoyed.

Rey is currently a Secondary 1 student at SST, always enjoying his time and is looking forward to go to school every day. The school offers a lot of avenue for the student to develop holistically in an environment that allows him to pursue his passion. The school’s parent support group is amazing as well!

Thank you once again, Empire Code. For being one of the instruments that helped Rey in his DSA to SST journey.”